Over the course of our trip ‘the boy’ has become very experienced at knowing how to pull the attention of the locals. A cute smile, a wave, or if they fail a ridiculously, a loud fake laugh in the unsuspecting target’s direction usually does the trick. Not only does he love the attention, but he’s also realised that it often means he can escape from his buggy. Once within reach ‘the boy’s’ outstretched arms will greet his target, an obvious sign that he wants to be picked up.

It happens so frequently that we’ve embraced the assistance. When we’re at a chaotic bus station and one of the ticket touts picks him up to give him a tour of the bus, it makes our job of putting our luggage on board and getting organised for the journey much easier.  If locals want a cuddle with ‘the boy’ when we’re clambering onto a small boat with backpacks, a buggy and a baby, again, it makes our logistical nightmare much simpler. 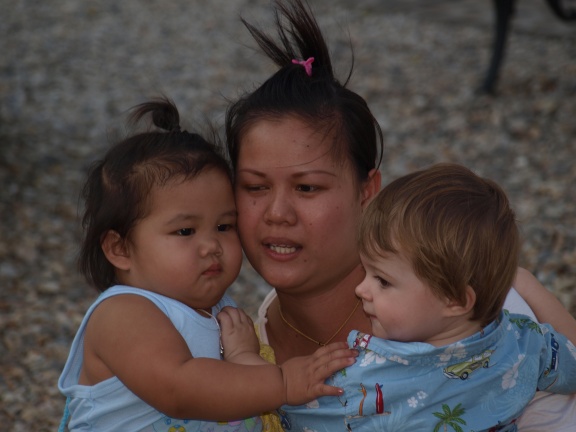 A local lady with 'the boy'

We always ensure he’s safe and in sight but there’s one thing that happens again and again and is very difficult to manage. Often the boy is returned to us clutching something in his sweaty palm. Always food, often bad food! Unlike at home where people check whether your child is allowed to eat x, y or z or, even more importantly, ask if they suffer from any food allergies, in Asia it seems fine to give any child anything.

On most occasions we thank them and then confiscate the offending item without causing offence. Over the past few months he’s been given chocolate bars, sweets, brightly coloured jelly, biscuits, lollypops, a bag of pork scratchings (!!) and pastries. On one occasion, whilst in a local restaurant in KL, I managed to intervene when a fellow diner was trying to give ‘the boy’ red bull through a straw. Luckily ‘the boy’ hadn’t yet mastered how to use a straw and much to the surprise of the man I explained that he wasn’t allowed fizzy drinks. Now, if anyone reading this has been to SE Asia you’ll know that the red bull here is super charged compared to that in the UK. If there’s one way to guarantee having a hyperactive child on your hands for the day then this is the quickest way to do it.

The most recent food incident was in Tha Ton.  We’d spent the morning visiting ‘Wat Tha Ton’ that’s positioned on the side of the town’s hill overlooking the Burmese border. Once at the top, and after looking around the spectacular Buddhist temple, we stopped for a coffee at the Monastery’s café.  ‘The boy’ was happily running around the grounds when he befriended one of the monks. The monk picked him up and walked him around, showing him the lovely views from the high vantage point. It was a nice break for us and ‘the boy’ was very content. Ten minutes later he toddled back with a big smile on his face and gifts in his hands, a pastry in one and an ice cream in the other.

The monk and 'the boy' have a chat

Up to this point in time, along with sweets, juice and MacDonald’s burgers, we had resisted giving ‘the boy’ any more than a taste of our ice creams, but if he was to have his own ice cream for the first time, then it might as well be a treat from a Buddhist monk!

‘The boy’ enjoyed his treat and we thanked the monk for his generosity.

What a nice little story we have to go with his ‘my first ice cream’ photo.

'The boy's' first ice cream, courtesy of a monk

Top tip of the day:
Over the last few months we’ve used many baby brands of mosquito repellent. The most effective to date is Johnsons baby anti mosquito clear lotion, available in Thailand for circa £2 for a 100ml bottle. In areas like Tha Ton, where there are many mosquitos, we’ve been using it day and night and so far so good as our baby hasn’t been bitten. 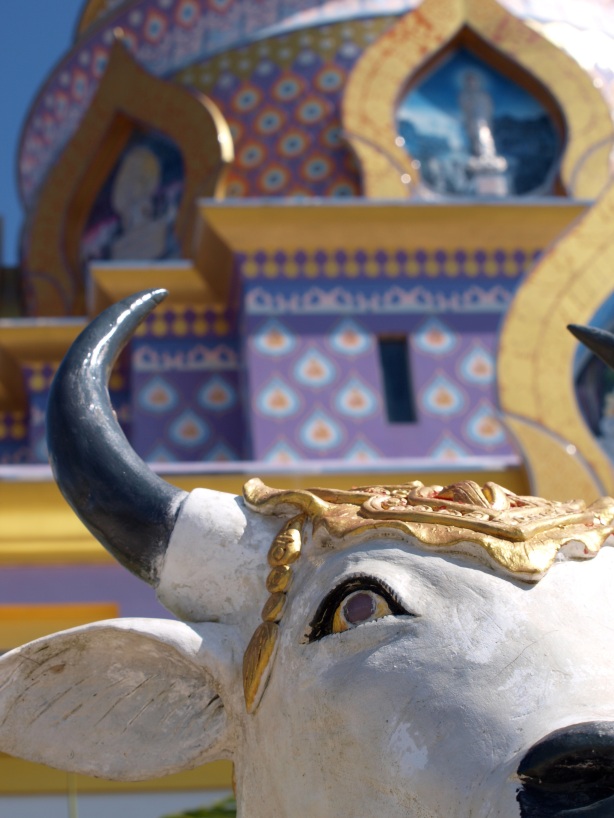