My other half has competition because today is the day when I get close up and personal with the big hairy beasts of Borneo – the Orang-utans. In Malay orang means “person” and utan is derived from hutan, which means “forest.” Thus, orangutan literally means “person of the forest.”

Fifteen years ago t discovered Dorset’s ‘Monkey World’ and watched the huge orange beasts in awe.  Since that day coming to Borneo to watch the free roaming Orang-utans has been on my ‘wish list’ of places to visit.

And now, after surviving the 20k journey on a battered local bus that had seen better days, we’re here.

Hanging out with my friends

Feeding takes place at 10am and 3pm but the walk through the forest is open for a number of hours each side of this.  As they are free to roam there is no guarantee that you will see anything and at the morning feed only one mother and her baby came to eat.

The afternoon was different. 7 or 8 Orang-utans came swinging out of the forest, hanging from the ropes in what looked like advanced yoga poses, their limbs so long and lean under the mass of orange fur.  The long-tailed macaque and silver lipped monkeys also made an appearance, desperately trying to steal the food from the platform without getting a clip around the ear from one of the Orang-utans. 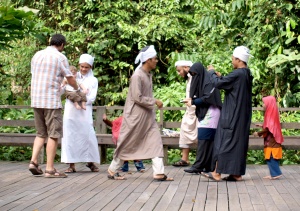 I was transfixed on them, but it was during this time when ‘the boy’ attrancted almost as much attention as the wildlife. At one point, pushing his buggy around the decking, he was being filmed and photographed by a number of local tourists. Ten minutes later and without even asking, he was lifted up and passed around a Muslim family in full traditional dress. Their video camera was running and many family portraits were taken with a plus one, ‘the sweaty boy’! I know it’s lucky to touch or pinch the cheek of a white Western baby, but still don’t quite get the fascination. 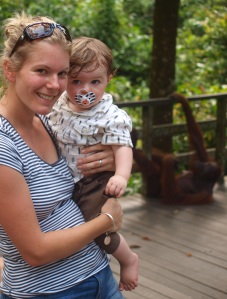 Anyway, an hour later and we’re still watching (the Orang Utans, not the families photographing ‘the boy’) and then we witnessed the highlight of the day. A male swung across the closest rope to us, hung for a while, dropped and then made his way slowly through the shrubbery to the viewing platform. A few seconds later and he’s sitting there right in front of us, nothing between us. He’s huge and the ranger advises us to take a step back to give him some space. After flashing his genitalia in a leg behind head pose he lay down, arm under his head and just watched us.  We’re watching him. He’s watching us.

Top tip of the day:
The majority of places we’re staying in don’t have cots but as a substitute ask if you can have a mat for the floor. Most guest houses have small mattresses to hand that are suitable for your baby to sleep on. We’ve been placing them against the wall and then we put our rucksacks down the other side to make a secure space for him to sleep.